In my mind one of the most likest parts to dent on your Jeep is your gas tank. The tank skid on early Tjs is nothing more than a tin plate to hold the tank in place. (The tank was improved in later years but still isn’t great)

Why do I need a skid my gas tank is plastic? Well you can puncture plastic too and over time all that thumbing and dragging over rocks is going to take its toll. Your fuel pump is inside the tank, you don’t really want to hit that to many times. I know from experience!

At the time of ordered this I really found 3 main options (December 2001)
A. Tomken
B. Kilby
C. Home made – was thinking about homemade since I am in Canada and this was going to cost me an arm and leg but I don’t have a welder and bender. When I started looking into designs and realized I could make a simple skid but simple isn’t necessary better.

So It was down to Tomken and Kilby. Kilby raises the tank a full inch higher than stock and is used by many people on some of the tuffest terrain. Never heard a negative thing about the product either and I’d dealt with Kilby in the past when I was working on my on-board air and he was a really cool guy.

Where to get it

Most off-road stores now carry the Kilby line but don’t have them in stock and at the time I couldn’t find anyone in Canada selling them. Note: National 4wd will now custom order them in for you.

I ended up ordering directly from Kilby on a group buy form Jeepsunlimited.com. Big mistake because shipping and duty cost almost more than the skid plate.

The packages showed up a few days after Xmas and it was like Xmas all over again. My skid plate got its first test the first day since I didn’t know UPS had dropped it off and I backed into it.

The skid weighs in at around 67 pounds in its packaging. 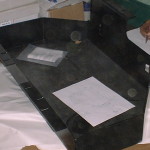 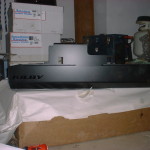 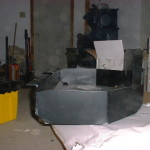 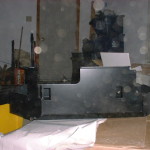 Photos of the original skid plate before installing

Note: its nice and rusty and a few dents and I even managed to separator the rear right corner and put a nice big dent in it once backing up into a rock i didn’t see in some mud. 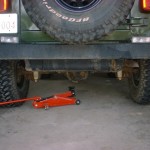 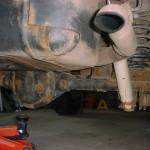 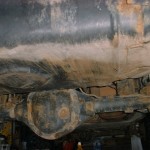 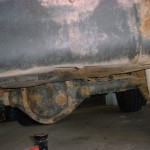 I planned on installing it a few days after Christmas but managed to break my humorous in a freak sauna accident… For a slight time thought I might not get the use of my arm back and I would need to sell the jeep. As time went on it got better but I still didn’t tackle the skid plate job cause it was a nice 70 pounds and I was only lifting max 5 pounds with my newly skid plated arm. Ten months later while I write this I still don’t have back full use of the arm but I’ve learned to adapt and live with it.

It took 6 months before I was ready to install. I still had a 1/2 tank of gas but figured I could deal with that. According to the install instructions you need a friend to help because one setup requires 3 hands. So since I’m down to one I figured I’d call my friend Andrew over to help out.

– If you don’t have tires bigger than 33s you might want to jack up your jeep and support it on jack stands so you have enough room to drop the tank. I didn’t have this problem but it just fit.

– Disconnect the ground cable from the battery and make sure there is nothing in your work space that might create a spark, you are dealing with gas vapors here.

– Take off the gas cap and remove the plastic surrounding by removing the 8 screws. Optional: Replace the cap so nothing gets in the tank

– The Kilby instructions says to cut the zip tie that connects the rear axle breather hose to the filler hose. Interesting… I don’t see a breather hose. I finally found it sitting low next to the factory skid… oh oh… I know I’ve been in water deeper than this… I made a note to check the fluid and reroute the hose when I’m done.

– Disconnect the electrical connection to the gas skid. (see red arrow) Instructions say slide the red clip to the side and disconnect the two.. red clip.. what red clip.. So I just lay there for awhile looking at it. I finally decided to try and pull it apart. It started to budge and then just let go. It looks like someone smashed the connector and the just glued it back together. I’m starting to realize someone else has removed this gas tank before and didn’t do a very good job.

– Disconnect the EVAP hose just by grabbing both ends and pull. Finally something that went easy

– Release the pressure in your fuel system. This might be different from year to year so check your factory service manual. On a 98 4.0L you just unscrew the cap thats been pointed at below with the red arrow and press in the pin with a screw driver to release the pressure. Make sure to put a cloth under the cap as gas may come out.

– Disconnect the fuel line at the tank. I thought this was going to be hard but its really easy just pitch the two tabs together and pull them apart. Don’t use tools because they can damage the connectors. Make sure to have a catch pan down cause fuel will now come out of the lines. More then I expected.. Clean up any mess before going on.

– Place a jack under the skid and try and get it centered and you may need to use a flat piece of wood or brick like I had too.

– Now for the fun stuff! Unbolt the sucker. There are 3 bolts in front and 4 in the rear. Leave the longer looking bolts in the rear alone for now. You might want to have your friend steady the tank when you get the last few off in case it shifts.

– Slowly Slowly lower the tank and have your friend guide the filler hose thought the frame and body.

– Now take this time to look under your jeep and plan your next mod on how to move that tank higher. 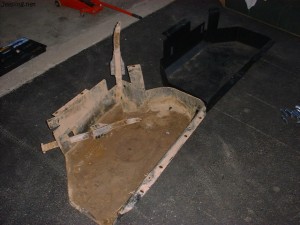 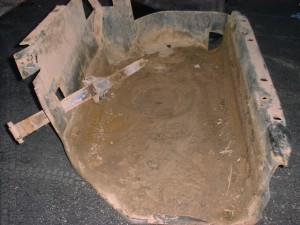 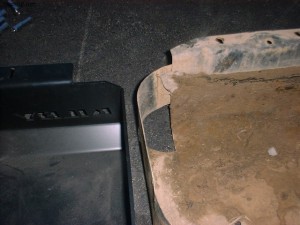 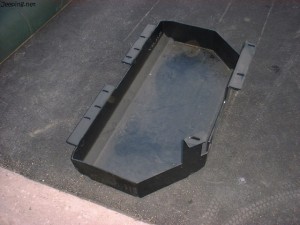 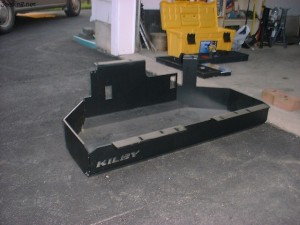 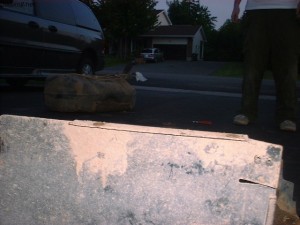 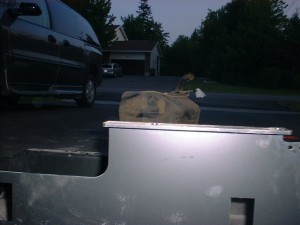 – Sample fit the Kilby skid without the gas tank you might think this is a waste of time but really its not! We found if we bent the front right arm a few cm’s back we could get a much better fit. We also found we needed another block on our jack since the kilby fits a inch higher. See the photo below for the arm we bent.

– Put the tank in your Kilby skid and use the old tie down strap and I’d suggest just putting them on semi snug.

– Jack the skid back into place and have your friend guide the filler hose back into place. We had a hard time doing this we couldn’t get anything to line up… We spent about a hour or more trying to do this. Finally I said you know this is stupid lets just drop it have a beer and start again. What do you know second time it went right on.. (Note: the yellow jacks are there for safety we had a half tank of gas and didn’t like working under the wobbly jack.)

– Reattach all 7 bolts loosely and see if you can push the skid back some. You may not need to worry with this but I’ve got a dana 44 and wanted as much clearance as I could. And to my luck it slide all the way back.

– Reconnect the fuel line, EVAP hose and electrical connector. Big problem for me here.. I slide the electrical connector on and it just fell back off, remember I found it broken before. So I ended up using a few zip ties to keep it together. Not the best solution but it works. (And is this this way 7 years later)

– Reinstall fuel filler ring and reconnect the battery. And your done!

– Well not quite… Turn on your Jeep and check for fuel leaks if none then your done so step back grab another cold one and admire your work. Watch for leaks over the next few days and make sure the bolts are snug after a week.

Side note I did checked my rear diff and no water in it! woo! 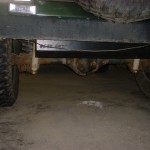 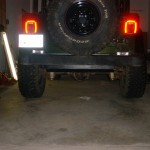 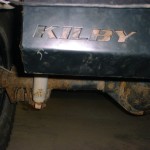 First I’d like to Andrew for helping me install the skid plate and thanks to Brad Kilby for all your helpful e-mails and tips. Your products are just incredible but your customer service is by far one of the best I’ve seen. I guess though since its near impossible to break your stuff you don’t have many people to complain to you.

This is the type of product that will not give you more power, help off-road or give better gas millage. What it does is gives you piece of mind knowing your gas tank is safe. This skid plate I’m not the least bit scared of dragging it over any few rocks, stumps and honda civics I can find. I highly recommend this product, the designed is top notice and the install is easy. Get one.

I’ve been now using this skid plate all summer and its been used a few times. It is holding up very well and I’ve put a few scratches in it but not a single dent yet and I’ve come down hard on it once or twice. The power coat is starting to be scratched but thats what I expected. I’ll just touch it up once a year with some black rust paint. The biggest thing I notice though is I just don’t hit the gas tank as much as I used too. I love the fact it is a inch higher and find a lot of the time I’ll see the person in front of me with the same setup but factory skid hit. I’ll be waiting to feel the rock and nothing, the inch alone is worth the upgrade.

Still running this skid and loving it. No problems. The powder coat is starting to come off but that is to be expected.